Introducing the first edition of The Blade newsletter, a monthly round up of all the goings on here at Scimitar.

We’ve always got something going on here at Scimitar. From events we’re supplying products for to the launch of brand new products, this blog will be the place to stay right-up-to-date with our latest happenings.
To sign up for the monthly newsletter, submit your email address at the bottom of the page.

Champions!
At the turn of the month, Bromsgrove Sporting Football Club picked up the Midland League Division One title, clad in Scimitar’s functional Qwick-Dri™ custom football kit.
What makes this feat even more special is the way they did it. Winning 33 of the 38 league games, Sporting remained unbeaten all season, scoring 132 goals and conceding just 23 in the process. In the process of this stunning run, Jason Cowley scored 42 goals in 42 games for the team, drawing comparisons from Soccer AM as the non-league Lionel Messi along the way.
As the official kit and teamwear suppliers, we’re delighted to be a part of this title winning success. Well done to all involved from the Scimitar team!

Scimitar Exiles Make Tournament Debut
The Scimitar Exiles, formerly known as the Forces Exiles, made their debut at a sevens tournament this month competing in Elite Mens Cup at the Heineken Kinsale 7s, followed by the first round of the Super Sevens Series at Bury St Edmunds.
While the results on the pitch didn’t reflect the general play, the team is beginning to gel and hoping to bounce straight back at the next two events – the second leg of Super Sevens Series and the infamous Chester 7s weekend.
Check out this stunning picture of our kit in action at the Kinsale 7s in Ireland.

Team RGB Building Supplies Cycling Team
The Tour Series is a much loved competition in British Cycling, touring the UK with high quality, action-packed elite cycling events.
Known commercially as the Matrix Fitness Grand Prix series, we are the official kit supplier for Team RGB Building Supplies. With this in mind, we had the honour of visiting the first round of the event back on the 9th May, which can be seen in the video we created below. Taking place at Redditch within our home county of Worcestershire, we were delighted to showcase our elite cycling kit to the world.
Spanning 10 venues in total (culminating in the final round in Stevenage on the 29th May), the Tour Series is proving to be a highly competitive event with a good turnout amongst spectators.
You can see the video of round one below.

End of the Rugby
As the rugby union season draws to a close, the semi-final of the Aviva Premiership sees reigning champions Saracens face Exeter Chiefs in what is a repeat of last year’s grand final.
Exeter are widely regarded as the most improved team over the past couple of seasons, and Rob Baxter told Sky Sports that the Chiefs would be “genuinely disappointed not to win the Premiership this season”. The winners of the semi-final bout will face either Wasps or Leicester in the final at Twickenham.
Amongst the rest of the professional rugby teams we proudly work with, Munster face the Ospreys in the semi-final of the Guinness Pro 12 at Thomond Park in Limerick.

Castle Triathlon Series
On May 28th, round one of the Castle Triathlon Series begins at the Lough Cutra Castle in Galway.
Kicking off the six-leg series, we’re delighted to be the official apparel suppliers for the second consecutive year, creating all sportswear & leisurewear as well as providing the online shop for the events.
As well as enabling participants and fans to get merchandise delivered to their home, we proudly offer the ability to pre-order merchandise for collection at a Castle Triathlon Series event of choice. The shop can be visited by clicking here.

Gung-Ho! 5K
We’re at the (exact) halfway point of the UK’s biggest 5k. With six events down already, six events remain in the 2017 Gung-Ho! series.
Hugely popular for individuals of all abilities, the event has already been to the likes of Birmingham, Edinburgh & Manchester, with upcoming events set to visit Leeds, Kent & Southampton.
As with the Castle Triathlon Series, we’re extremely proud to be the official apparel suppliers, visiting all events with our range of premium merchandise as well as maintaining the online shop for the immensely popular event.
The Gung-Ho! online shop can be seen here.

Homeless Rugby
On Saturday 20th May, Sixways Stadium in Worcester plays host to the Homeless Rugby International Cup.
An initiative that builds partnerships between rugby clubs and regional homeless charities, the home nations of England, Scotland & Wales will do battle as part of a wider festival of rugby  being run by the Worcester Warriors Community Foundation.
We’ve got the kits ready in the changing rooms, the pitch is looking brilliant and the weather forecast is pretty good.
Let’s do this!

New Technology
Racerback Vests
After a significant trial period, we’re now able to provide custom racerback running vests to running clubs and athletics clubs. The perfect alternative to the traditional vest, our racerback vests are made to the same Qwick-Dri™ specification and are available to purchase with the same options and finishes. This includes the likes of mesh side panels, rear reflective piping and all over sublimation print.
To add custom racerback vests to your inventory, get in touch with the team today by emailing [email protected], or by giving us a quick call on 01905 425324.

We have a range of offers and deals on at the moment, regardless of your sport or sector. Come to the UK’s leading custom sportswear & promotional item manufacturer for your next enquiry and see how we stack up.
We won’t be beaten on quality. Email us at [email protected], or give us a quick call on 01905 425324.
That’s all from this month’s edition of the Blade. For the latest news and events, be sure to follow us on Facebook, Twitter & Instagram.
You can sign up for blog updates here: 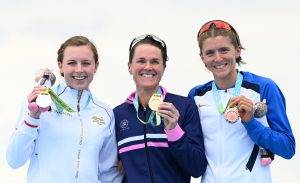 With the 2022 Commonwealth Games having come to a close, we wanted to pay tribute to Bermuda who had their most successful games in history. 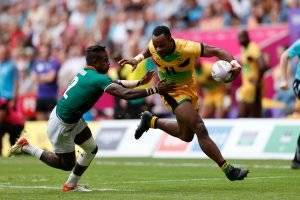 We were delighted to supply Jamaica Sevens with playing kit for the Games. With all rugby sevens matches played within the opening three days, it